#1
I've always been fascinated by the Joker (DC Comics) and how he speaks to a modern urbanization-related angst towards civics and sanity.

I've also been a fan of The People's Court (TV) and how it speaks to a modern pedestrian interest in 'interactive governance' and 'politics-access' (e.g., CSPAN).

So this is a work-up of an idea I had regarding a pedestrian investment in the Joker's 'world' and how it symbolizes real-world concerns regarding civics-mismanagement.

The Joker is a criminally-insane villain (and terrorist!) who challenges the courage and wits of the heroic urban-vigilante Batman by positing difficult circumstances which would draw the mind towards anarchy.

The Joker sat down in the judge's chair in the mock-trial set up by his goons at Arkham Asylum (Gotham's center for the criminally-insane) after he hijacked it for a special pirate-TV broadcast on Halloween Eve.

"Hear you all --- and here you all are! I am the Joker...and your judge in this farcical trial which I hope will illuminate the loopholes in Gotham's legal consciousness! The defendant is of course the 'valiant' caped-crusader Batman (whom we've tied up for the trial), and the jury is of course comprised of the 'vile' inmates of Arkham. You 'villains' will decide the outcome and determine the verdict for Gotham's soul! The defense attorney is a 'goody-goody' woman named Mrs. Shapiro, and the prosecutor is our own villain-friend Harvey Dent (former Gotham D.A. who has turned into the disfigured rogue punisher we all know as 'Two-Face').

Two-Face stood up and began delivering his opening speech.


"Thank you, your Dishonor {winks at Joker, while jury giggles}. We all know why we're here. This isn't about Gotham's sense of honor or duty but rather an incrimination of the hypocrisy regarding the city's mismanagement of law and criminal-insanity, which is why Batman (aka, 'the Dark Knight') is on trial...

We all know of Batman's heroics and antics. However, today, we will cite specific scenarios and subjects that reference our interest in drawing out why Batman is unable to deal with the real complexity of crime in Gotham City.

We know Batman apprehended and incarcerated the maniac Scarecrow (who now sits as a dishonored jury-member) and stopped the cycle of water-reservoir poisoning that 'plagued' Gotham just two years ago. We're all relieved that panic ended...but does Batman really care about eco-pollution or water-quality in Gotham? What does Batman know about desalination and the process of water-purification? All Batman seemed to care about was stopping Scarecrow. Is that bias? It is if we 'liberally' claim that Batman was a 'water-purity' defender and not simply a 'mindless brutish cop.' You decide, jury...

I'll have more as the trial progresses!"


"Thank you, Two-Face. Now, Mrs. Shapiro will have a chance to deliver her retort-address in defense of Batman..."


Mrs. Shapiro stands and puts her hand on Batman's shoulder to comfort him and assure him she will do her very best (since she is a respected Gotham legal-attorney and graduate of Harvard Law School). She then approaches the judge's chair and turns towards the jury and begins her opening speech.


"Thank you (I think), your 'honor' ('Mr. Joker'). I'll do everything in my power to treat this as a fair trial, and I care about the reputation of Gotham's most celebrated 'vigilante' (Batman).

We know that Batman's work is neither easy nor inspiring, since he deals with the very hairy problem of criminal-insanity, and since the jury in this 'Joker's courtroom' is comprised of the malignant and maligned criminally-insane elements of Gotham (incarcerated in Arkham), I appeal to the jury to hear my case regarding the virtue of Batman and his right to help Gotham City prosecute criminal insanity. Regardless of his intentions, Batman seems to care about justice and welfare (even if he is technically not a lawyer by profession). I contend that Batman is a 'valuable friend.'

Batman deals with a Gotham he 'inherited,' not one he designed, and as such, he has to seek constant compromises so he can wrestle with problems that were not created by him! For example, Batman knew nothing of water-purification procedures in the Gotham City Reservoir, but he cared enough to deal with the Scarecrow's plague of terror, simply because he was deeply concerned about general anarchy.

So should we try Batman as a 'fanatic' or simply as a 'vigilant patriot'? This is the question that should weigh heavy in the troubled minds of the jury here today.


"Well, that was eloquent (indeed!), but now we'll hear what Two-Face has to say about the risks Batman takes to 'wrestle' with criminal-insanity and if Gothamites should feel safer/saner because of his heroics/antics!"


Two-Face stands up and begins his address by calling Talia al Ghul to the stand.


"Thank you, Mr. Joker {winks at Joker, as jury giggles}. Well, I admit I'm humbled by the cogent words of the well-educated defense-attorney Mrs. Shapiro who was obviously 'recruited' for this trial because of her sensitivity to legal matters in Gotham. I'd like to interrogate Talia al Ghul now who was incarcerated here in Arkham by Batman (even though the two were once romantically-involved!)."

"Now, Talia, you once loved Batman, did you not?"

"That's correct, Two-Face. We dated and then Batman betrayed me so he could incarcerate me (after he found out I was helping my father Ra's al Ghul with a careful and radical scheme involving the hijacking of a plane carrying a ruthless druglord who was coming into Gotham for a 'profitable meeting' with the mayor."

"Thanks, Talia for that honest answer. It's obvious Batman's betrayal disarmed you and you now wonder why you loved him at all! Do you think Batman was fair in his dealings with you, and if so, what did he do personally/specifically to treat your insanity?"

"Well, I felt that Batman took a gamble courting me and then gambled when he decided to betray me so he could stop my father from hijacking that suspect-airplane for Gotham's sake."

"Thanks, Talia...you may step down. Your honor (Mr. Joker), my point here is simple --- Batman is a human being like all of us. He has basic emotions and desires (such as love and the pursuit of honor). Why should Gotham rely on him as a 'superior arbiter' of justice when it comes to matters of the heart? After all, criminal-insanity is so 'complex' that we have to often rely on matters of the heart, and that is the real challenge of the jury in this trial of Batman --- to unearth the 'spirit of the law'!"


"Thanks, Two-Face. Now, Mrs. Shapiro, who would you like to call to the stand to close out this trial (before the jury delivers its important verdict for Gotham City)?"


Mrs. Shapiro gets up and decides to call Harley Quinn (the Joker's girlfriend and ally) to the stand.


"Thank you, Mr. Joker. Thank you Harley for sitting on the stand here today. I called you, Harley, since you know Joker personally and can testify of the Joker's claim that Gotham is anarchistic by spirit and not simply by choice.

Harley, did you ever feel Joker risked your life in some terrorist-schemes he was cooking while he was free and roaming around Gotham as a madman?"

"Well, Mrs. Shapiro, of course, I knew the risks involved with being madly in love with Mr. Joker, so I gladly and willingly joined him on his important terrorist-crusades, but I guess I would admit that he never really explained just how risky his daring schemes really were. I wonder why that's true?" {turn to Joker and frowns}

"Alright, Harley, that's a fine answer. So, since you felt 'at-risk' scheming with the Joker, did the fact that Batman was chasing the Joker make you feel...safer?"

"Well, I always feel safe(!) with Mr. Joker (I love him!), but I guess I wondered what Batman (the 'Dark Knight') would do to cease violence and madness altogether, and I guess that made me feel...safer!"

"Thanks, Harley, you may step down. That's all your honor. To the jury, I state that my final point is that Batman challenges us by doing what no one else is willing to do --- to engage the anarchy of criminal-insanity especially when there is no one to protect us (even the 'villains')."


Two-Face stands up and demands to cross-examine Harley Quinn before the trial ends, and Joker allows him to do so.


"Thanks, Mr. Joker. And thanks, Harley for remaining on the stand to answer extra questions for the jury here today.

Harley, I want to ask you about the time when Batman arrested Edward Nygma (aka, 'the Riddler'). The Riddler wanted to work with Joker on a terrorist-scheme involving the kidnapping of the mayor's daughter who was at the opening ceremony at the new Gotham Aquarium. Batman incarcerated Riddler without asking him what his intentions were, as if what he only cared about was the arrest!"

"Thanks, Harley. You may step down now. My closing point, Mr. Joker, for the jury is simple --- since criminal-insanity is so frustratingly complex (and so unnervingly 'human') Batman simply needs help..."


"Well, thank you Two-Face and Mrs. Shapiro. Let the jury deliberate now in private for two hours, and I will deliver the verdict and final statement (for Batman!)."


The jury exits the room as Batman sits patiently and waits with Mrs. Shapiro for the verdict. Batman explains to Mrs. Shapiro that he thinks this farcical-trial is a pure mockery of the justice-system in Gotham, but his wise defense-attorney reminds him they are both 'prisoners' and must subject themselves to the 'due process' of this 'Joker-courtroom.' Batman bites his lip and concedes to wait for the verdict (but secretly begins untying himself with a safety-pin hidden in his belt so he can pounce on the Joker and flee with Mrs. Shapiro if the need arises!).

The jury re-enters the room and hands Joker their verdict. Joker reads it over and over and over, sometimes smiling, and sometimes grimacing in strange sorrow before delivering his final statement to the 'courtroom.'


"Alright! Two-Face and Mrs. Shapiro both spoke eloquently, cogently, and persuasively about their contending views regarding the 'sanctity' of criminal insanity and the crucial role Batman plays in Gotham City (and whether or not he should receive help!). The jury has decided to let Batman go and Mrs. Shapiro as well so we can all safely return to our TV-rooms for tonight's episode of Matlock(!). However, the jury also recommends that the GCPD (Gotham City Police Department) seriously consider providing Batman with a sidekick or ally so he can better 'wrestle' with criminal insanity. After all, isn't criminal-insanity a 'team-effort'? If the GCPD fails to act on this advice, Batman just may once again be kidnapped...for another trial in my 'courtroom' (and next time, the jury will not be so...polite!). That is all...DISMISSED!" 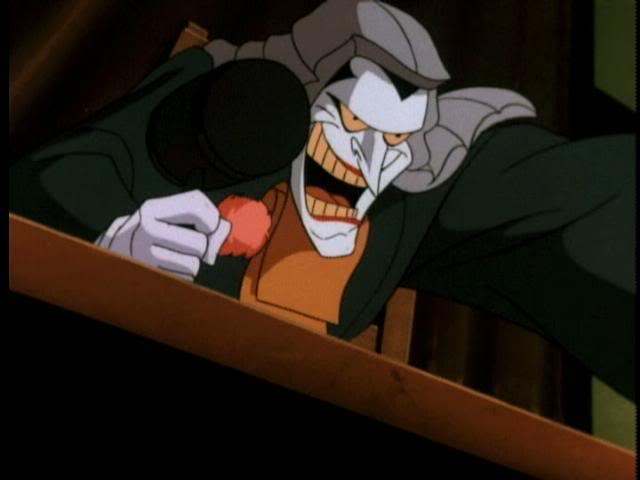