Excuse if I have some place in my mind where I go time to time...
A

#1,427
Pokemon Go has actually gotten me back into Pokemon. The last one I played was Pokemon Diamond at most 10 years ago. The last time I played it back then, I stopped for whatever reason just after getting the first badge. Thanks to Go, I've not only started a new game in it, I'm also heavily considering buying either Sun or Moon when they come out. Not only is Pokemon Go meant to get people interacting with each other over Pokemon IRL, it's something to bring people like me back into the experience, and get them to buy the newest generation.

#1,428
New information on some new and some previously revealed pokemon:
http://bulbanews.bulbagarden.net/wiki/New_Pok%C3%A9mon,_Hyper_Training_revealed_in_new_trailer

Wimpod is a Bug/Water-type Pokémon. It has the new Ability Wimp Out, which causes it to flee or switch out when its HP falls below half.

Bounsweet is a Grass-type Pokémon. It can have either Leaf Guard or Oblivious as its Ability.

Comfey is a Fairy-type Pokémon. It can have either Flower Veil or the new Ability Triage as its Ability. Triage gives the highest priority to HP-restoring moves used by the Pokémon with this Ability.

Mudsdale is a Ground-type Pokémon. It can have either Own Tempo or the new Ability Stamina as its Ability. Stamina boosts its Defense by one stage when hit by an attack.

Mimikyu (known in Japanese as Mimikkyu) is a Ghost/Fairy. It has the new Ability Disguise, which allows its disguise to take a hit for it one time (preventing Mimikyu from taking damage); if it does, its disguise gets busted, and Mimikyu slumps down. It was originally revealed in this month's CoroCoro.

Bewear is a Normal/Fighting-type Pokémon. It can have either the new Ability Fluffy or Klutz as its Ability. Fluffy halves the damage taken from contact moves, but doubles the damage taken from Fire-type moves.
(Proctor): "We will now begin the tenth question. Everyone turn your papers over. You have five minutes."
(Genin) looks at the tenth question.
QUERY: Cake or Death?
(Genin) decides.
About five minutes later...
(Proctor): "Everyone who has chosen Cake... has failed."
A

#1,429
Wimpod is going to be the Abra of this generation, running from battle in the wild JUST when you want to capture it.
P

#1,430
autobot314 said:
Wimpod is going to be the Abra of this generation, running from battle in the wild JUST when you want to capture it.
Click to expand...
Abra is worse, since with Wimpod you can keep throwing pokéballs at it.

Hmmm. Looking up ways to get homebrew on my up-to-date-firmware 3DS. Ninjhax 2 seems like the easiest method... and what do you know, I own a copy of Cubic Ninja.
Y

#1,432
There is a method WITHOUT Cubic Ninja?
Man, ever since I lost my smash bros brawl I've been out of the homebrew community...
Hobbie: Imagining how bad fics could be fixed.
P

#1,433
Hmm, apparently it's going to be a thing that every important trainer from now on will have a full team of six including at least one legendary and a mega-evolution.

This includes the Flare scientist (Volcarion and Mega-Heracross) in the Power Plant who should've only had one Pokémon, which was an unpleasant surprise after 7 upgraded grunts.
C

Fan made game Pokemon Uranium has been officially released. It's been in development for nine years and features 200 all new Pokemon and a new Nuclear type.

Now is the time to grab it before a DMCA hits it.
R

#1,435
Yeah not making that mistake again. Downloading it now, even though I haven't even heard of this game until today.

EDIT: Seems like it's already been hit by a DMCA.

#1,436
The whole site is down. I think everyone else had the same idea to download the game before Nintendo killed it and the servers couldn't take it.

#1,437
Rising Dragon said:
Yeah not making that mistake again.  Downloading it now, even though I haven't even heard of this game until today.

Got some press on some major gaming sites and they got flooded. Keep trying or use the twitter Mirrors and you can still nab it.

It's pretty good, but clacks a decent fullscreen mode. Hopefully they'll manage to update with one. Alt+Enter will fullscreen it, but you lose part of the screen doing that. Not a small part either so don't do that.

Best way to play is to set it to large and it gives you a big enough window to play in. Devs have said a future update will add it in.

Been messing around with it a bit and it's got some nice pixel art and the location has an interesting tropical vibe about it.
J

#1,439
Apparently Nintendo never actually contacted the Pokemon Uranium team or sent them a DMCA directly. They just saw that a couple of mirrors had gotten taken down, got scared, and took down their own download links pre-emptively.

I wonder if it was even Nintendo that took down those mirrors. Kind of strange for them to send DMCAs to mirror sites but not the official one. This might be the work of trolls for all we know.

#1,440
Pokémon Uranium is officially shut down. The website's gone, and the official Twitter posted the following: 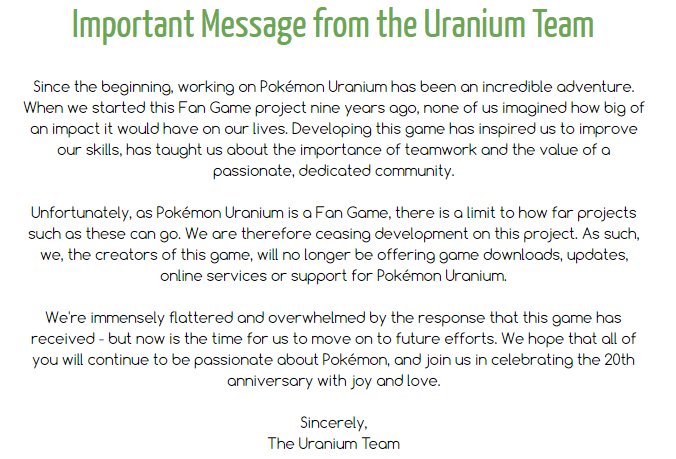 Damn, and I never dl'd the last update...

EDIT: Found on the official Uranium sub-reddit. Looks like the game will get future updates after all! YAY!
Excuse if I have some place in my mind where I go time to time...
R

#1,443
The Sun and Moon demo is out, as well as massive datamined spoilers I won't discuss here, but I find the PC's movement to be weird, especially when they're running. This could be due to the new angles as well as the characters being proportioned differently, but it's like the legs are too long.

#1,444
Pokemon Sun & Moon give 'Splash' move a purpose, finally
Excuse if I have some place in my mind where I go time to time...

#1,445
Guide: How to transfer Ash-Geninja from the 3DS demo to the full version

Guide: How to get a Shiny starter in Sun & Moon
Excuse if I have some place in my mind where I go time to time...

#1,446
I've been playing Pokemon Sun a lot lately and I gotta say, it's been a long time since I've become this invested in a pokemon game. I've reached the third island and I'm loving the characters so far, Lillie, Hau and company are way better than those dipshits who followed you around in X & Y. The plot is more interesting, the trials are funnier and more fun (although still disappointingly easy) and the gameplay is much more varied and deeper with stuff like Festival Plaza and Poke Pelago.

I particularly like how much more clever and mature the dialogue is. For instance, I just met a tourist from Kanto who complained about how people yelled at her when she tried to fly around on her pokemon, telling her it was against the law. She was amazed when I told that everyone in Alola instead uses specially trained Charizards as a kind of public transportation system.

I found that conversation fascinating, because it hints at the rarely if ever mentioned government of the region. Why is it illegal for people to fly on their own personal pokemon? Was there a widely publicized incident of a trainer falling to their death off of a flying pokemon (or drowned on a surfing pokemon) that inspired lawmakers to subsidize a public "ride pager" program with mandatory safety gear?
R

#1,447
I don't recall such a conversation. I do remember a tourist asking me if it was true that everyone uses Charizard for transportation, rather than using the Fly move.

Pokken Tournament DX trailer
Excuse if I have some place in my mind where I go time to time...

#1,450
Pokemon ultra sun and ultra moon will offer an "alternate story" to the previous games..? Da fug does that mean? If it was a sequel then surely they would just call it a sequel right? I'm gonna be annoyed if this is just gonna be an updated rerelease like the old gens did with emerald and platinum.
You must log in or register to reply here.
Share: Facebook Twitter Reddit Pinterest Tumblr WhatsApp Email Link
Top