What are you watching?

#226
Bah, Kermit was never in to Piggy.  That was a horrible retcon.


[video=youtube]https://www.youtube.com/watch?v=SAZihmoE8-s[/video]
"Bib and napkin, knife and fork, is the only way that I'll touch pork."

Staff member
#227
Oh my goodness, I never saw that sketch. That's hilarious.
Welcome to TFFv3! Here's where we are right now.

#228
Agents of SHIELD, first season, finally got around to it. Hate to say it, but some episodes just have some really dumb stuff in them. Boss tells his science team that if they can't do the thing they don't think can be done it's going to be their fault? SHIELD tiptoes around Malta but next episode is just casually strolling into Belarus? Agent outright says that alien device is making him angry enough he thinks he shouldn't be in the field and he's put in the field?

But it also has some really good stuff. Good interactions, acting, development, so most episodes are fun to watch.
Do not underestimate the fork - Mahiro
Computer is Blue Screen o' Death'd and it's Labor Day weekend. Expect it to be a while if you try to reach me.

#229
TNT is rebooting Tales From The Crypt... with M. Night Shyamalan as Producer

It will be part of a new 2hour horror block, to debut in Fall 2016.
Excuse if I have some place in my mind where I go time to time...

#230
Peter Serafinowicz cast as the Tick in Amazon revival

Also: Forged in Fire is amazing. Well worth watching.
Excuse if I have some place in my mind where I go time to time...
A

Maybe in a year from now, I'll be able to resurrect this thread with a wheel of time season 1 review. So hyped. This was the fantasy series that ate up most of my youth.

But do check out Iron & Fire if you can. 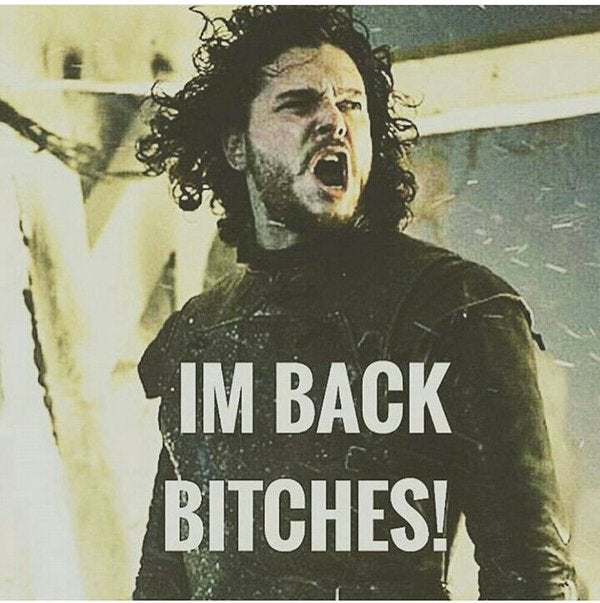 Staff member
#234
For this reason, I find myself hating Game of Thrones. If I don't see an episode as soon as it comes out, by the next day, too many things would spoil the show for me.

Fortunately, I saw the episode in question before seeing the earlier reply. But .. it bothers me .. in a strange way ...

#235
I'm with you, chronodekar. People need to be less of a dick about spoilers.

Staff member
#236
So I'm watching Flash S2. It's nowhere near as tightly scripted and perfect as S1, but the last three out of four episodes have done some great stuff. I LOVE time travel plots, and the doctor's suggestion at the end of episode 19 gave me chills. One behind now, but I'm saving it to watch with a friend.
Welcome to TFFv3! Here's where we are right now.

#237
Getting caught up on Grimm season 5. Honestly did not expect some of the twists they've pulled this season, like the Juliette situation, or Black Claw, or the mysterious Treasure of the Knights Templar... Really looking forward to the big season finale.

Also glad NBC renewed the show for season six.
Excuse if I have some place in my mind where I go time to time...
D

#238
Was I the only one seriously disappointed with the finale for Penny Dreadful?

#239
HBO cancels 'Vinyl', scrapping plans for a season 2 revamp
Excuse if I have some place in my mind where I go time to time...

#240
[video=youtube]https://www.youtube.com/watch?v=cCMaaC1tyPg[/video]
"I object to Intellect without discipline. I object to power without constructive purpose." Staff member
#242
As someone who has NOT caught up on all the episodes yet (Game of Thrones) .. did you idiots REALLY need to show that off without spoiler tags????

#243
Well to be fair. Knowledge of everything in that picture has been pretty much confirmed years ago. Season 5 pretty much laid it out.

Maybe not the specific path but that end point has been known for at least 2 years. Even longer for book readers.

#244
Been rewatching 'Allo 'Allo and I'd forgotten just how funny it was.

It's a farce that plays up to national stereotypes and the main character is impossibly attractive to women, despite being a balding, dumpy-looking bloke. But that's part of its charm.

Looking at it, you can tell that only one country could have produced it.

#245
Gabriel Luna joins 'Agents of SHIELD' as Ghost Rider
Excuse if I have some place in my mind where I go time to time...

Series may be RDJ's Perry Mason reboot.
Excuse if I have some place in my mind where I go time to time...

Series may be RDJ's Perry Mason reboot.
Click to expand...
Oh My! I haven't heard that name in a while. The Perry Mason novels were a LOT of fun. I think an uncle still has books around - which I find myself reading every now and then. They aren't too big, and I can finish them off in a few hours - good stuff.

#248
Lot's of GOT fans here. I'm currently watching the show again on http://damegameofthrones.com/en/
I'd like to talk about the show but there're no spoiler tags available, right? =(

#249
You just gotta improv, bro. Type
[ /spoiler] and remove the space and voila!
The Narutoversity
Theories and worldbuilding for the Narutoverse​
A