Writing aids and such.

#1
Just for general writing aid stuff pulled from the internets.

Such as this image: 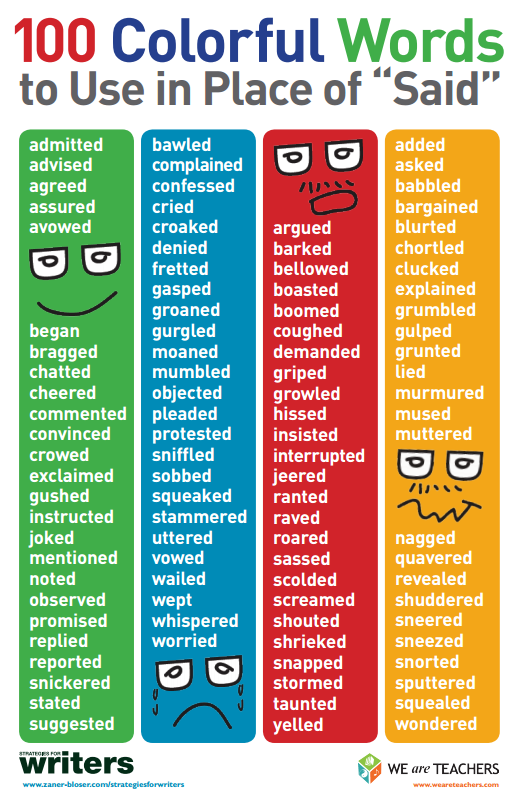 It doesn't have to be a thesaurus kind of post like this one, or even related to grammar necessarily, just general tips, links, and motivational stuff that is helpful for writing somehow. Pretty much anything educational relating to writing fits here. Videos, images, etc...

Staff member
#2
This, THIS is very useful. There have been soo many times when I wanted to quote something a character is saying, but "said" gets too bland beyond a point. Thanks for this Contrabardus !

#3
To make this readable, click on the image to open it, then right click and select View Image to be able to magnify the image. It's weird that this is a two step process, but that's how the forum software handles it. There's also the redheaded stepchild of this mess, the possessive of "Who" is Whose, not Who's or Whos. Who's is the contraction for "Who is" and Whos is not a word.
Last edited: Dec 6, 2018
F

#4
I think the best advice we've given collectively was when we broke a writer of a bad habit. That habit was using semi-colons for the primary form of punctuation in a paragraph. Only one period was used at the end of each paragraph, but the other sentences in it were divided by semi-colons followed by capitalized first words. I personally spent hours just copying paragraphs and reformatting them just to show the writer how else to punctuate sentences.
"The crazy are usually harmless; it's the sane people who cause all the bad shit." - Me
Z

#5
From personal experience, having a totem/trigger helps a lot. SImply put, you have an item, place, or some other marker that tells your brain "It's time to write." As long as it is in effect, you are writing. If you HAVE to stop writing, put it away first. This helps train your brain to get into that writing mode on command, instead of waiting for inspiration to strike, or for things to be just right for writing.

I bought a blank white hat, wrote "Writing" on the front of it, and put it on any time I really want to write. Sounds stupid, but it works.
You lost the Antichrist? What do you mean you LOST the Antichrist!?!

#7
How to format dialogue properly.

Another short PDF document on the same subject.

Staff member
#8
That makes a lot of sense. And it makes me wonder how bad some of my dialogs are. Thanks @Contrabardus !

#9
From a thread a while back on Original Characters.

A OC or ACC can be a good thing, if done carefully, and if really needed. The issue is a lot are either not needed, or implemented badly, author avatars, not likeable, or turn into MarySu/GaryStu's

I've seen a few over the years done well, and the stories in them are quite enjoyable reads.

The formula to good ones is simple in concept, but hard in practice.

1. Do not make them all powerful/all knowledgeable and solve or have answers to all canon issues near immediately and can do no wrong. Even if have knowledge or power, give them flaws.
2. Do not make them be little more than a author vent or lecturer to all that the canon cast does wrong
3. Make them have a full background with a not so perfect past (make them have character flaws) that not only appeals to canon characters, but to readers.
4. They must serve a relevant purpose. That purpose can vary, either to train/teach the cast something they otherwise would not know, or to tell a story from a non-canon view. Be saved by one or more canon cast members, or alter canon history, perhaps just by their presence or knowledge.


Examples of ones I personally liked over the years:

Jeffery Kevin Davis - First appeared in the multicrossover NGE/RANMA/Other story of 'Sic Semper Morituri', and in other stories by same author.

Captain Andrew Simms - from a whole bunch of FMP fan fiction stories by Steve Edwards, assumes a 2nd sub is fielded by Mithril, by a more traditional and seasoned commander that is still fairly young.

Kyle, from a series of Ranma stories by Enigmatic Magus (he went by a different pen name years ago, but has been that one for awhile). Kyle is a normal guy whom has to jump universes, after meeting Mara (Ah/Oh My Goddess), Makoto (Sailor Moon), and Nabiki (Ranma 1/2).

Pretty sure that last served as the basis for another ACC made later for a two arc story called 'Sleeping with the Girls' by Admiral-Tigerclaw, which is also pretty good.
Click to expand...

My main hurdle about their introduction is "Why should I care about this person?", especially when we're talking about a series that has reasonably tight plot like NGE or cast the isn't suited to random substitutions like Love Hina.

That's not to say that original characters can never work in a series - one of my favourite stories is In Vain Doth Valour Bleed, and that's about an entirely original Zeon unit.

A Star Trek story about a Federation ship crewed solely by Vulcans patrolling the Romulan Neutral Zone is fine, but your story about how some great and original character do not steal captain mentored Kirk, Picard, Sisko or Janeway while they were junior officers is going to be a much harder sell. Same with Star Wars - you have a whole galaxy to play with, but don't go thinking that your created love interest for one of the main original trilogy cast is going to go down well with a wide audience.

Creating a character that has some secret backstory to a canon character, like say Sybok or Michael Burnham, comes across as lazy and cheap. Like you don't have much faith in the character and you need this crutch of a connection to get people to care about them.