Oh, and it's x64 only currently, sorry about that x86 OS users. Might be time to consider upgrading your OS.

For those who wonder "Why not just play on the consoles?": 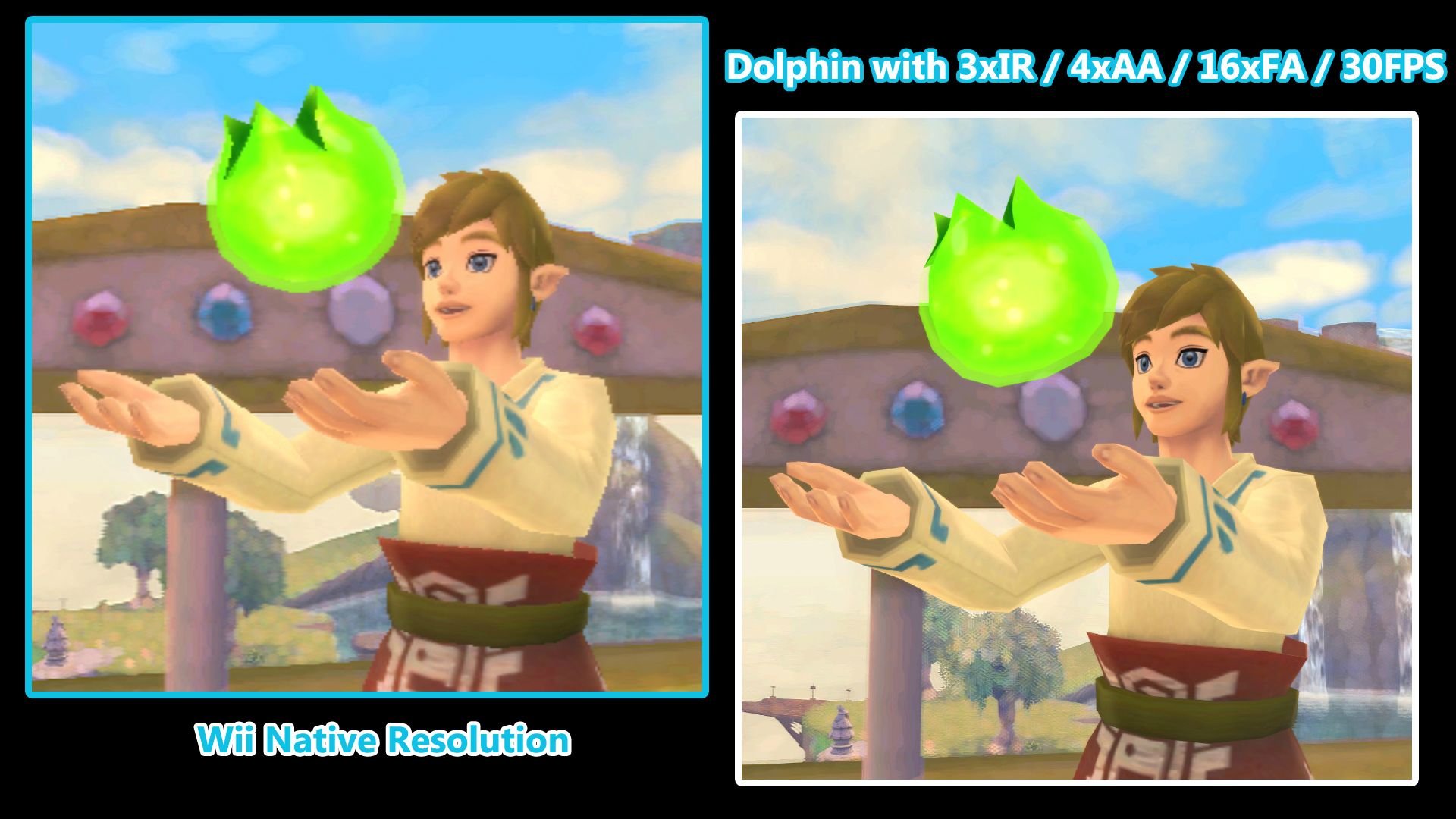 #2
this scene from swyward sword...
would I still need a wiimote with motionplus to play it?
Hobbie: Imagining how bad fics could be fixed.

Not The Goddamn @dmin

#3
YOu don't have to... but you could.
Then you have absolutely no right to be a moderator. Ever. You have damned yourself. By your own words, you do not deserve nor can you handle the responsibility inherent to the position, and should be stripped of it immediately.
Click to expand...
-Lord Raine, comically missing any point whatsoever.
C

#4
Yorae Rasante said:
this scene from swyward sword...
would I still need a wiimote with motionplus to play it?
Click to expand...
Skyward Sword needs a Wii motion plus.

Too many mechanics rely on it, such as charging your sword and the swing direction being so important to facing certain enemies.

The game was designed around doing things with it that can't be emulated with a gamepad.

You could play Twilight Princess that way, but not Skyward Sword unfortunately.

The gamepad support only applies to games that support gamepad input. If a game requires a Wiimote to play, you need to use a Wiimote to run it.

It's not that hard to hook up a Wiimote to a PC even if it doesn't have integrated Bluetooth. Most modern PCs do and a lot of people don't realize they already have it. If not, you just need a USB Bluetooth jack, and those can be had for cheap.

You can get a battery powered wireless sensorbar dirt cheap too just to make things a bit easier. The battery life on those sensorbars is super long as well. It's really just an infrared lamp that the camera on the front of the Wiimote uses as a reference point. Amazon has them, or you could just light two candles and set them on either side of the screen, that works too actually. [No, seriously it does work. Still recommend getting a cheap wireless sensorbar though.]

I recommend downloading Dolphin, installing it, and trying to connect your Wiimote to it if you have a WMP lying around. You won't lose anything in trying.

It's well worth the trouble of setting things up in my opinion. I'll never go back to using my old Nintendo hardware again. More so now because of some of the stuff they've managed to clear up with this release. After this release, I basically have no reason to keep my Wii out of storage anymore.

I know no one asked, but just to clear it up before someone does...

We can't help with finding Roms. I make my own. I modded my old Wii after I got a Wii U so I could turn my GC and Wii disks into ROMS for Dolphin years ago. No one can point you to where to DL them without breaking forum rules. Piracy is bad, Mmmkay?

I honestly don't consider DLing a Rom for a game you own on disk piracy in this particular situation, especially since they aren't sold that way and there are no plans to do so, but rules is rules and all. Pretty sure no one is willing to get themselves in trouble over it.

At any rate, you're on your own for finding Roms, though Google can help you with finding out how to make your own. It's worth the effort if you happen to have a Wii you never use and a few USB flash drives to transfer stuff around. It won't 'break' your Wii, but you won't be able to use it to go online on Nintendo's servers anymore.
Y

#5
There are no more nintendo servers for the wii anyway.

My problem is the lack of a motion plus myself, and they are not cheap here... I was hoping I wouldn't need one.

I'm using my wii mostly for my sister nowadays.
Hobbie: Imagining how bad fics could be fixed.
C

#6
Yorae Rasante said:
There are no more nintendo servers for the wii anyway.

My problem is the lack of a motion plus myself, and they are not cheap here... I was hoping I wouldn't need one.

I'm using my wii mostly for my sister nowadays.
Click to expand...
There are only like four or five Wii games that require Wii Motion Plus, and Skyward Sword is the only one that really matters.

Red Steel 2 is the only other one requiring it that's really a full game, the others are all crapware or minigame compilations like Shaun White, Golf Trainer, Wii Play: Motion, or Wii Sports Resort.

There are other games that support it, but it's not required to play.

So, unless you think Skyward Sword is worth it on its own, you're not missing out on much with a regular Wiimote and Dolphin. It's nice to have the extra functionality in some games, but the vast majority work perfectly fine with just the standard Wiimote.

Seriously worth it too. Don't waste money on "HD" versions of Twilight Princess or Wind Waker. The old versions of the game running on Dolphin look better than the updated HD versions on consoles if you bump up the IR, and turn on some of the post processing stuff.

It is worth noting that you -can- emulate the Wiimote controls, but there aren't nearly enough buttons for this on a standard gamepad given the amount of motion stuff you have to do in Skyward sword to play. You could, in theory, play Skyward Sword using a custom KB+M setup. If you have an aftermarket gamepad with a bunch of extra programmable buttons it's feasible.

Another possibility is using the KB and Mouse in tandem with a gamepad. Set up the gamepad for standard motions and controls, and then do some of the odd motions that you won't use much on the KB keys.

I wouldn't really recommend this unless you have no other options and absolutely -have- to play Skyward Sword on PC, as it would be super clunky and complicated. It is -possible- though, just pointing that out.

If you have something like a Razer Hydra, Vive Controllers, or Oculus Touch you might have better luck as it works okay with the emulation, but a real Wiimote is still a better option.

My advice is that if you're going to try it without a Wii Motion Plus, just use the KB+Mouse to emulate it, it'll be the closest thing to playable you'll get outside of buying one. Even that is probably more trouble than it's worth really.

If you really want to play Skyward Sword this way, my advice is to just save up and bite the bullet on a WMP. It's not like it won't work with other games, and sometimes the extra functionality is nice. This isn't a thing that must be done right now or you'll miss out or anything. I personally think it would be best to just wait, get Dolphin running and play other stuff, and get the optimal experience once you have what you need to play Skyward Sword the way it was meant to be played.

You might consider finding a used one. Check Brick and Mortar game stores as they often have used peripherals for cheap. Pawn Shops are another place you might find one. Hell you might find an entire Wii cheaper than buying a new one would cost you. If your sister frequently uses your current Wii, it's not a bad idea as you could use it to make a Rom ripping machine without worrying about screwing up the old one. It's not hard to do, but also risks bricking the machine if you screw it up. It's kind of like flashing bios in that way.
C