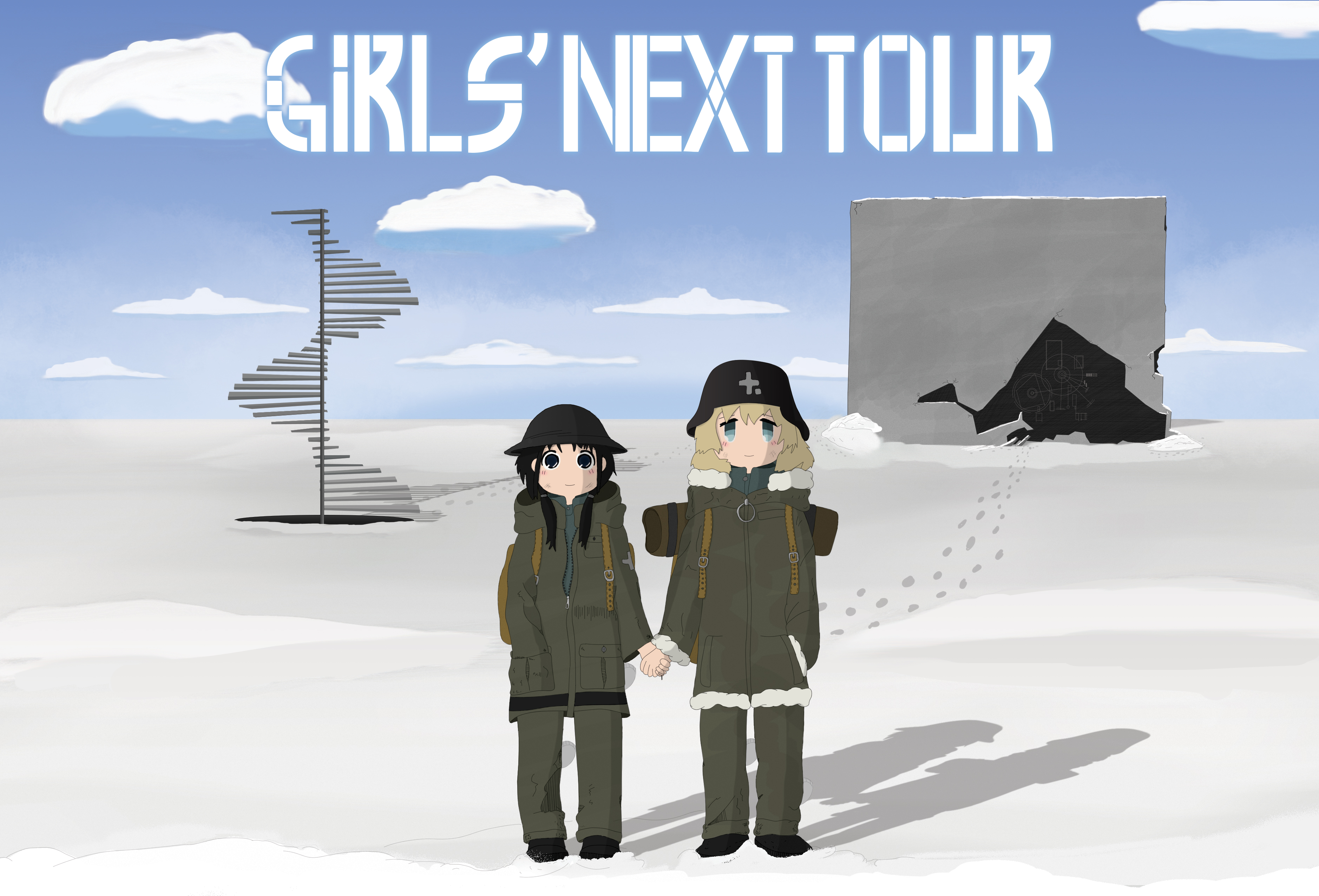 You can read it here:
Archive of our own // Scribble Hub // FanFiction // eBook

Summary -
Following the day after they reached the top of the world, Chito and Yuuri are faced with a life or death decision as they decide to journey towards the center of the mysterious layer.

SPOILER ALERT: The story continues right after the ending of the manga!

It was already past noon when Chito opened her eyes, above the vast mechanical city they left behind just the day before. With barely any sleep, her vivid and strange dreams seemed to skip through a lot of the events that transpired after they left their home up to the last climb. She remembered some part of her dream where she was walking hand in hand through a wheat field together with Yuuri and it almost felt like they were happy and in heaven. A little bit dazed from the short slumber, it took her a moment to realize her current predicament. They spent what felt like a whole lifetime climbing up to the last layer to find just a strange derelict block settled long before their time.

Opening her eyes, Chito rose up from underneath the only blanket they had left in the world, careful not to wake Yuuri up. Although she was used to sleeping on hard surfaces, it always left her cramped the next day. Soaking the warm sun from above, she stretched her arms and yawned. “Mmm… the sun feels so much warmer up here.” Chito thought to herself as she stretched. Looking at the far distance, the sun vastly illuminated the derelict city beneath them, melting some of the snow from the night before on the top layer. She couldn’t help but enjoy the view of the unobstructed horizon as it went on forever in the distance of the deserted city below.

Yuuri was still in a deep slumber laying down on the cold ground, mumbling and smiling in her sleep as she always used to do. Chito with a smile kept watching her and couldn’t help but think about how she was probably dreaming about all the tasty food she could eat in her dreams. “Even after all we’ve been through, she still only has food on her mind.”

They spent the whole night climbing the exhausting and dangerous stairwell up to the last layer and a short hearty slumber was all that she needed for now to calm her mind. After Yuuri wakes up, they had to come up with a plan of what they were going to do next. For now, she didn’t have the heart to wake her up just yet, as her dreams were probably giving her more comfort than what this cruel existence could offer.

Feeling slightly peckish, Chito leaned to scour through their backpacks to see if she missed something the other day. Besides a few items they managed to keep, she could feel the solid edges of the package they found back on their journey, containing the bomb with the lightable fuse. “I guess… we could use this to blow ourselves up... in the end…” she thought to herself “I hope it will be painless, she doesn’t deserve to suffer…” closing her backpack, her expression changed to one of sadness at the thought of losing the only person in the world that matters the most to her. The grim thoughts were always clouding her mind like the darkest and most frightful darkness that follows you around.

Still, the whole concept of death seemed sublime to her, even after they were surrounded by it from the very start of their lives. Friends and everyone else in the world are currently in their graves, perished from war and hunger. Some of them passed so quickly in their lives, that they never managed to remember their names and faces. The killing for what little food remained in the world, never seemed to stop. It felt like blind luck that they have lasted this long and managed to leave that war of hunger behind. Probably just like their grandfather, they had to eventually accept their fate. Food was just so scarce in this world that giving up and dying from starvation was a common occurrence. If the concept of heaven was true everyone they loved waited for them on the other side and she and Yuuri would eventually join them soon.

Nevertheless, even if this reality was hopeless and devoid of any happiness, she had that constant urge to keep fighting for her friend’s sake. She would never abandon the only companion in the whole world that brings her happiness and a reason to live, even with all the incredible and painful memories they shared.

“I guess… our first priority is to look for food... We ate up the last ration packet last night.” she thought to herself, looking down at the empty packet of ration they had the last night. Their backpack weighing even less could make the rest of their journey easier. “Maybe there is something edible up here on the last layer… I guess we will worry about that when Yuu wakes up... For now, I just want to enjoy the warm sun laying next to her.”

Having her thoughts to herself, the next hour she kept repeating the same questions in her head. “What’s next for us? - What is this place up here? - Could there be more to this layer that we didn’t see last night in the darkness?” She knew that it was crucial to make a decision right here and now if they were going to go back down or continue their journey on the last layer. The option to just sit here and accept their fate and eventually starve or freeze to death was far from what she had in mind since last night, but no matter what they decide it still felt kind of hopeless. Living sure has been nice, but all she wanted was to make even more memories with Yuuri. However, unless they find a shelter or food up here, they would eventually starve or freeze to death.


Chito felt like she couldn’t be selfish in this situation, she had to fight for Yuuri’s sake. Even if she felt disheartened at this moment and everyone she knew was gone from this life, she wanted to spend what little time she had left with her friend. “I can’t give up for Yuuri...” grasping her own hand beneath the blanket she thought to herself. “I just... can’t…”

A short time passed before Yuuri woke up from her slumber, mumbling as she brushed her eyes and drool from her mouth… “Uhhhh….. hey Chii-chan… you are awake…” she softly mumbled and yawned stretching her arms.

“Hey, Yuu. I’ve been for some time now - I didn’t want to wake you up. You looked so adorable sleeping and mumbling there next to me.” Chito replied to her, as Yuuri continued stretching her arms. “Do I have to guess that you were dreaming about food again with all that mumbling?”

“You know me Chii-chan…” she smiled “It sure was a tasty dream. We were eating a lot of fish we caught from a lake just like the one we saw in a picture that time - I really want to have a fishy again… soooo tasty” slightly smacking her lips, the thought of eating fish was making her peckish again. “Ahh, the sun… it’s so warm. Chii-chan, I love this view, I feel like I can reach the sky from up here if I just held out my hand.” she smiled reaching up to the midday sky, covered with just a few clouds one could hope for on a clear day.

“Yeah, at least the view was worth coming up here Yuu!” Chito replied as she kept looking into the far distance. However, something kept worrying her and she had to talk to Yuuri about the questions that have been troubling her ever since she woke up from her slumber.

“So, umm - Yuu - What do we do next?” Chito with a worried look turned around to face her “I mean we got up here… but we have no supplies, food and we had to leave our broken ‘Kettenkrad’ behind. So far we only found this strange block. I thought grandpa told us to come up here for a reason but - we found no one and nothing...”

Yuuri looked back at her as her expression changed with a worrying look on her face. “Oh right - yeah - um..” sitting back on the cold ground she looked around, she felt speechless about their current situation as well “…maybe we can explore this layer or go back down and look for something? I mean we didn’t see much in the darkness what’s out there in the distance... there must be a place where we can call home Chii-chan” she replied scratching her head. “But - hey, at least we reached the top together. Wasn’t that our plan all along?”

Yuuri seemed unsure what to say next as her eyes filled with worry staring back at Chito. It was the first time since they left their village that they were unsure what to do next. Up to this moment, they had supplies and a simple goal to survive as they reach the top of the city with the hope that they will eventually find a home, food or someone else, even other survivors that could help them out. But without any supplies and food left, she felt hopeless about what they would do next.

“Do you think we made a mistake climbing up here Chii-chan?” Yuuri asked her.