What are you watching?

This is a film worth seeing. The special effects can be a little awkward at times, looking a bit like Polar Express or the Jim Carrey 'Christmas Carol', but very well done.

There is one cringe-y bit a little bit past the mid-way point, you'll see it coming.
My twitch channel

So it turns out that if you don't have annoying characters, creepy and inappropriate content and are actually able to see what's going on in an action sequence, you can make a decent Transformers movie.

If this was the first movie that had been released, you could understand why the franchise has grossed so many billion dollars. Worth seeing, as the soundtrack has some decent tunes on it.

#1,978
Caught The Front Runner last night, a reasonably well put together movie about a scandal I didn't know anything about.

It did have a nice point about journalistic ethics and why the best people rarely run for office/stand for election.
R

#1,979
I watched Godzilla Plant Eater it was shit!
We were promised a epic Kaijuu Battle between Godzilla and King Ghidorah and we didn't get it.
Lechery is my strength! Lechery is my justice!

So much ass I never could see, so many D-cups falling on me. Could it be my destiny.....? To be HAREM KING!

Rean shall go down in history as the greatest of Awakeners, The Hero of Erebonia, The Divine Blade of Flames and finally....the slayer of fangirls. XD?

The makeup on Christian Bale is phenomenal.

As for the content of the film, it's pretty funny and you start to get an idea how much shady shit's been going in the corridors of power. 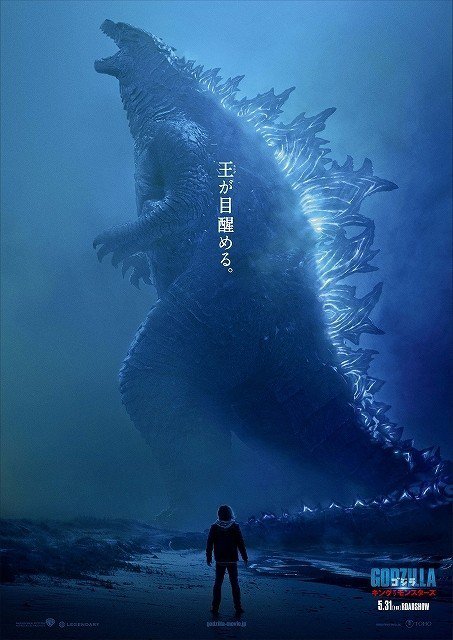 No spoilers here, but if you liked Unbreakable, then I think you'll like Glass. And Bruce Willis gives a great performance, the first one in a long time. It's like he actually gives a damn about the role and it's not just a paycheck.

James McAvoy is also great, and Samuel L. Jackson is his usual excellent self.

Worth checking out, in my worthless opinion.

#1,983
Saw Alita last night. I'm going to keep the spoilers light, but if you've read any of the manga you'll be fine.

As you can imagine, it's a pretty Westernized version of the actual story. And it went through the normal contortions of turning an animated feature into a film adaptation.

But my sister, no fangirl of Alita or anime in general, loved it. So I can say that the contortions were probably effective at getting bodies into seats.

As an anime adaptation, the comparatively short length forced a lot of changes.

As initially reported the story gets as far as the beginning of the Motorball arc, but they really contorted the chronology of the story to make it happen, and Alita's 2nd League debut happens while Hugo is still alive.

Makuku ends up being squashed together with at least two minor characters to give us the sewer scene with the grind cutters - and they've left off the colliseum entirely, so Makuku doesn't have Kinuba's giant body (they made the grind-cutters the weapon of a minor Motorball player that Hugo's gang targets at Vector's request). While they still relayed Makuku's story about being abandoned in the sewers, its so rushed that most of the pathos is lost (in no small part because he lacks the maggot body). Cameron tries to make us pity the guy during the fight the way we did Makuku, but it's a pretty hard sell when he looks so much more normal.

Vector, Ido, Alita and Hugo all survive as characters pretty much intact, albeit with some obvious changes (Hugo is depicted as being in his early twenties, etc). They played up Vector's villain status, and Alita kills him after Hugo dies (so the later subplot with Kaos to build a tower to Tiapheres will have to change - if they make it that far).

Jennifer Connelly plays a character who only appeared in an OVA - in this she's Ido's estranged wife, and Alita's initial body (which does have the flower engraving on the arms) was originally intended for their deceased daughter. She works for Vector as an engineer for Motorball players (his primary business in this version). Ido's Tiapheran mark is gone in this version - he says he removed it himself - and honestly it makes sense for the adaptation, given that Jennifer Connelly's stated desire to return to the floating city and the fact that she still has her mark. It would spoil the reveal of Ido's origins.

The one thing I have a hard time forgiving is what they've done to Desty Nova. His screentime is pretty minimal, but they've decided to make him a much more serious villain - neither flan nor his maniacal laughter have made an appearance yet - and there's been no talk of karma or the nature of humanity or sanity. I'm really going to have a hard time accepting this version of Nova going forward, if James Cameron makes enough money to justify a second film. He's even still in Tiapheres, and he's already as powerful as he was in the early stage of Last Order.

The acting is pretty decent - apart from some understandable awkwardness around Alita's green-screened face, and the few extremely Western filler scenes thrown in are forgivable.

The berserker body has some of the later Imaginos functions - nanotech, but not the chameleon ability - and they've also made given damascus blade Martian origins... and in this version Alita steals it from Zapan during the scene where she damages his face. Zapan's character is handled pretty well, but I think the obsession he has towards Alita doesn't translate well for a Western audience.

Ido's assistant isn't Mr. Gonzo - initially I thought it was supposed to be Tanya, but it's just a random hefty black actress they shoehorned in. I don't know much about James Cameron, but this might actually have been a diversity thing - the only other major black character is Vector, who is one of the bad guys. There was nothing wrong with the actress's performance, but she was completely forgettable, and the conversation that Ido has with Gonzo about the berserker body instead happens with Alita.

Also, in this version Alita goes to the crashed Martian ship and takes the berserker body from it, instead of Ido having done it years earlier and putting it into storage. There's some weird addition about Alita's cybernetic heart being special Martian tech that allows her to interface with the berserker body - I think it was an unnecessary addition, but it's forgivable.

Christoph Waltz is an amazing actor, but he really should have been Nova - he plays a whimsical villain far better than a heroic character. I have to assume he didn't want a background role. He's also pretty old by now, and it was really hard to buy him as a hunter-warrior given how awkward the rocket hammer design they went with was. It looks quite like some of the more "realistic" versions I've seen people make on Youtube, in fact, and it really didn't seem to add much power to his strikes (like the ones on Youtube).

A younger actor, or a sleeker design (one more faithful to the original) would have worked much better.

Separating my love for the source material from the fact that it had to be changed for the new medium, I'd give it a 7/10.

Far, *far* better than every live-action anime adaptation I've ever seen, and by a wide margin. It might have been better if it had been made by Marvel Studios, but it would also have been butchered worse than the people Nova kidnaps.

#1,984
Just back from Lego Movie 2 and it's OK. Not nearly as good or as fresh as the first one or the Lego Batman movies, but perfectly serviceable. I haven't seen the Ninjago movie, but I hear that's quite poor in comparison.

We can finish with the Lego Movie franchise though, otherwise they'll get as stale as Shrek and the Minions.

It's OK. Standard Marvel origin story fare. I was entertained enough for the run time, but it's nothing special. Felt like a Phase 1 movie, rather than a late Phase 3 entry because there's nothing to elevate it, like in Winter Soldier or Civil War.

See it or don't, it's no skin off my nose what you watch.

It's got Mark Strong, and he's always good even when he's in the schlockiest of movies.

No spoilers, but several characters have satisfying endings to their character arcs.
K

#1,990
Detective Pikachu. It's as awesome as it sounds. There's kind of a cringey bit at the very end, but it goes by quickly. The Mr. Mime interrogation goes very dark, very quickly, but you will laugh.
My twitch channel

#1,992
Just got back from Detective Pikachu, finally a game based movie that Hollywood hasn't fucked up. The comments about Mewtwo in the movie make me wonder what continuity this was following.

If you liked the first two movies, you'll love this one. It expands on the setting and the action is kick ass.

Some very questionable science, some human drama, but plenty of destruction.
R

#1,995
Just saw Godzilla: King of the Monsters it was Awesome.
This is how you make a Godzilla movie you got that Gen Urobuchi!
Lechery is my strength! Lechery is my justice!

So much ass I never could see, so many D-cups falling on me. Could it be my destiny.....? To be HAREM KING!

Rean shall go down in history as the greatest of Awakeners, The Hero of Erebonia, The Divine Blade of Flames and finally....the slayer of fangirls. XD?
C

#1,996
Ranma Uzumaki said:
Just saw Godzilla: King of the Monsters it was Awesome.
This is how you make a Godzilla movie you got that Gen Urobuchi!
Click to expand...
Eh, while not great, the PE trilogy was trying to be a completely different kind of movie than the new US Godzilla movies.

Urobuchi was going for the disaster drama and horror element of the original and Shin Godzilla rather than the spectacle of the Godzilla Vs movies.

Even though they are all Godzilla movies, it doesn't make a lot of sense to compare them because they are trying to be different things.

If Urobuchi wanted to do better at making the kind of Godzilla movies he wanted to make, Shin Godzilla is probably the movie he should be looking at, not KotM.
Last edited: Jun 1, 2019

Elton John's life story, where the important parts are accompanied with his songs.

#1,998
Avengers: Endgame is being re-released next weekend, with new footage
Excuse if I have some place in my mind where I go time to time...

#1,999
Marvel is butthurt that they haven't dethroned AVATAR yet. They need to make another $44 million - but honestly this might not count, because it's a different cut of the film.
P

#2,000
Recent views:
Detective Pikachu, John Wick 3, MIB 4 good.
Rocketman good generally, but the fantasy elements were too frequent.
Godzilla, Aladdin, The Dead Don't Die didn't like any of them.

Also wtf they're re-releasing Endgame the same weekend to compete against their next tentpole Spiderman? I already expected Yesterday to get destroyed at the box office, but if it has to compete with both it's going to be a catastrophe.
You must log in or register to reply here.
Share: Facebook Twitter Reddit Pinterest Tumblr WhatsApp Email Link
Top