#51
Hmm. Now we have Two Guys from Andromeda Kickstarter going on. As well as Carmageddon, and just one-two days ago, Tex Murphy. Getting a little crazy out there~

Though some controversy has arisen regarding Kickstarter. All about the cancelation of this project.

Reached it's goal, and surpassed it. But... was canceled because some people complained that it was lewd and goes against Kickstarter guidelines.

Umm... before you can even set up a Kickstarter, you had to get approval from Kickstarter. So they approved it, before taking it away. <_<

I mean, one of the guidelines is "Promoting or glorifying acts of violence"

So now the Tentacle Bento people have set up a Paypal to get their funding. And a whole lot of pissed off backers spreading the word about Kickstarter's censorship.

#52
<a href='http://pc.gamespy.com/articles/122/1225030p1.html' target='_blank' rel='nofollow'>Clang by Neal Stephenson</a>
"I object to Intellect without discipline. I object to power without constructive purpose."

Staff member
#53
Keep meaning to make this post, keep forgetting because of reasons. Anyway, some interesting things on the Kickstarter front. The most recent big name game Kickstarter is coming to a close: <a href='http://www.kickstarter.com/projects/659943965/planetary-annihilation-a-next-generation-rts' target='_blank' rel='nofollow'>Planetary Annihilation</a>, a spiritual successor to Total Annihilation and Supreme Commander fought on the galactic scale. It's well over the funding goal and has met all of the vital stretch goals, but at the $2million mark the soundtrack gets orchestrated. If that's your thing, or if you're interested in getting the next big RTS for about $20, throw some money their way.


Also of interest, <a href='http://www.kickstarter.com/projects/165500047/broken-sword-the-serpents-curse-adventure?ref=live' target='_blank' rel='nofollow'>a fifth Broken Sword</a> was recently funded through Kickstarter, and is currently climbing its way through its own stretch goals. At $800K they say that they'll be able to make the game exactly as they envision it, but at $1M they're going to make a sequel to Beneath a Steel Sky. Holy shit.
Welcome to TFFv3! Here's where we are right now.

#54
Threw in twenty bucks for Planetary Annihilation, hopefully I won't have any problems this time. You really took your sweet time informing us though, it's 14 hours left and already past 2 million.
Vote Ryuugi for Moderator!, because Democracy!

Also holy shit the progress tracker image is hysterical. Early on it was showing the planet types that were to be added by having meteors inbound to destroy them. They took their sweet time updating the image for the Galactic War stretch goal, and when they did it was apocalypse head making like Pac-Man. Then he ate the galaxy. Now? He wears a Beethoven wig. MY FUCKING SIDES.
Welcome to TFFv3! Here's where we are right now.

While this is really one of the kickstarter game projects that was already near completion when they asked for funding, it's nice to see one of these things come to fruition. If you didn't kickstart this game and you like roguelikes, it's a pretty good buy. I've been enjoying (and raging at) it for the past week or two since they made it available to backers a bit early.
TATARI
TATARI Contest Archive
S

This is amazing, cant wait to see how high this gets.

#58
Well, everyone was asking for it, so now Obsidian has started up their own kickstarter.

Staff member
#59
Fatuous One said:
Well, everyone was asking for it, so now Obsidian has started up their own kickstarter.

Thanks F1!
Welcome to TFFv3! Here's where we are right now.

This is amazing, cant wait to see how high this gets.
Click to expand...
I'm still trying to decide how much money I want to shovel at this one.
Vote Ryuugi for Moderator!, because Democracy!
L

#61
Fatuous One said:
Well, everyone was asking for it, so now Obsidian has started up their own kickstarter.

Well, to anyone who hasn't clicked on the link given already, this is all you need to know:

Project Eternity will take the central hero, memorable companions and the epic exploration of BaldurÆs Gate, add in the fun, intense combat and dungeon diving of Icewind Dale, and tie it all together with the emotional writing and mature thematic exploration of Planescape: Torment.

Combat uses a tactical real-time with pause system - positioning your party and coordinating attacks and abilities is one of the keys to success. The world map is dotted with unique locations and wilderness ripe for exploration and questing. YouÆll create your own character and collect companions along the way û taking him or her not just through this story, but, with your continued support, through future adventures. You will engage in dialogues that are deep, and offer many choices to determine the fate of you and your party. àand you'll experience a story that explores mature themes and presents you with complex, difficult choices to shape how your story plays out.
Click to expand...
S

#62
Pledged. If its a quarter as good as Planescape it will be worth every cent.

If only Kickstarter had happened in time to save some other great companies and game series. We could've had Beyond Good and Evil 2 by now if Kickstarter had only come sooner.

Frelling funded in 3 days...who da man!
"I object to Intellect without discipline. I object to power without constructive purpose."

Staff member
#65
I've got some Kickstarters that might be interesting, but first your daily dose of unadulterated rage: <a href='http://www.neogaf.com/forum/showthread.php?t=492070' target='_blank' rel='nofollow'>Publisher approached Obsidian to push a game on Kickstarter that they would publish and own the IP for.</a>

<a href='http://www.kickstarter.com/projects/165500047/broken-sword-the-serpents-curse-adventure?ref=category' target='_blank' rel='nofollow'>Broken Sword</a> is in the final stage, really hope we can break $1M and get BENEATH A STEEL SKY 2.

Visit TFF on Discord!
A

#66
Watashiwa said:
<a href='http://www.neogaf.com/forum/showthread.php?t=492070' target='_blank' rel='nofollow'>Publisher approached Oblivion to push a game on Kickstarter that they would publish and own the IP for.</a>
Click to expand...
Seriously Watashiwa?

Staff member
#67
Amodelsino said:
Watashiwa said:
<a href='http://www.neogaf.com/forum/showthread.php?t=492070' target='_blank' rel='nofollow'>Publisher approached Oblivion to push a game on Kickstarter that they would publish and own the IP for.</a>
Click to expand...
Seriously Watashiwa?
Click to expand...
No.

Can you tell what I've been playing recently?
Welcome to TFFv3! Here's where we are right now.

#68
Watashiwa said:
I've got some Kickstarters that might be interesting, but first your daily dose of unadulterated rage: <a href='http://www.neogaf.com/forum/showthread.php?t=492070' target='_blank' rel='nofollow'>Publisher approached Obsidian to push a game on Kickstarter that they would publish and own the IP for.</a>
Click to expand...
We were actually contacted by some publishers over the last few months that wanted to use us to do a Kickstarter. I said to them "So, you want us to do a Kickstarter for, using our name, we then get the Kickstarter money to make the game, you then publish the game, but we then don't get to keep the brand we make and we only get a portion of the profits" They said, "Yes".
Click to expand...
Wow.

That is shockingly bad.

Staff member
#69
Do the names "Brenda Brathwaite" and "Tom Hall" mean anything to you? How about John Romero? Or Wizardry, Commander Keen, Anachronox and Realms of Arkania? Guess who's teaming up to make an <a href='http://www.kickstarter.com/projects/lootdrop/an-old-school-rpg-by-brenda-brathwaite-and-tom-hal' target='_blank' rel='nofollow'>Old School RPG</a>? A new first person sci-fi/fantasy RPG made by some industry greats? Sold!

Also, if they get $2M? They're making TWO at the same time, to be played back to back almost like the Oracle games.
Welcome to TFFv3! Here's where we are right now.

DAWN OF THE FINAL DAY 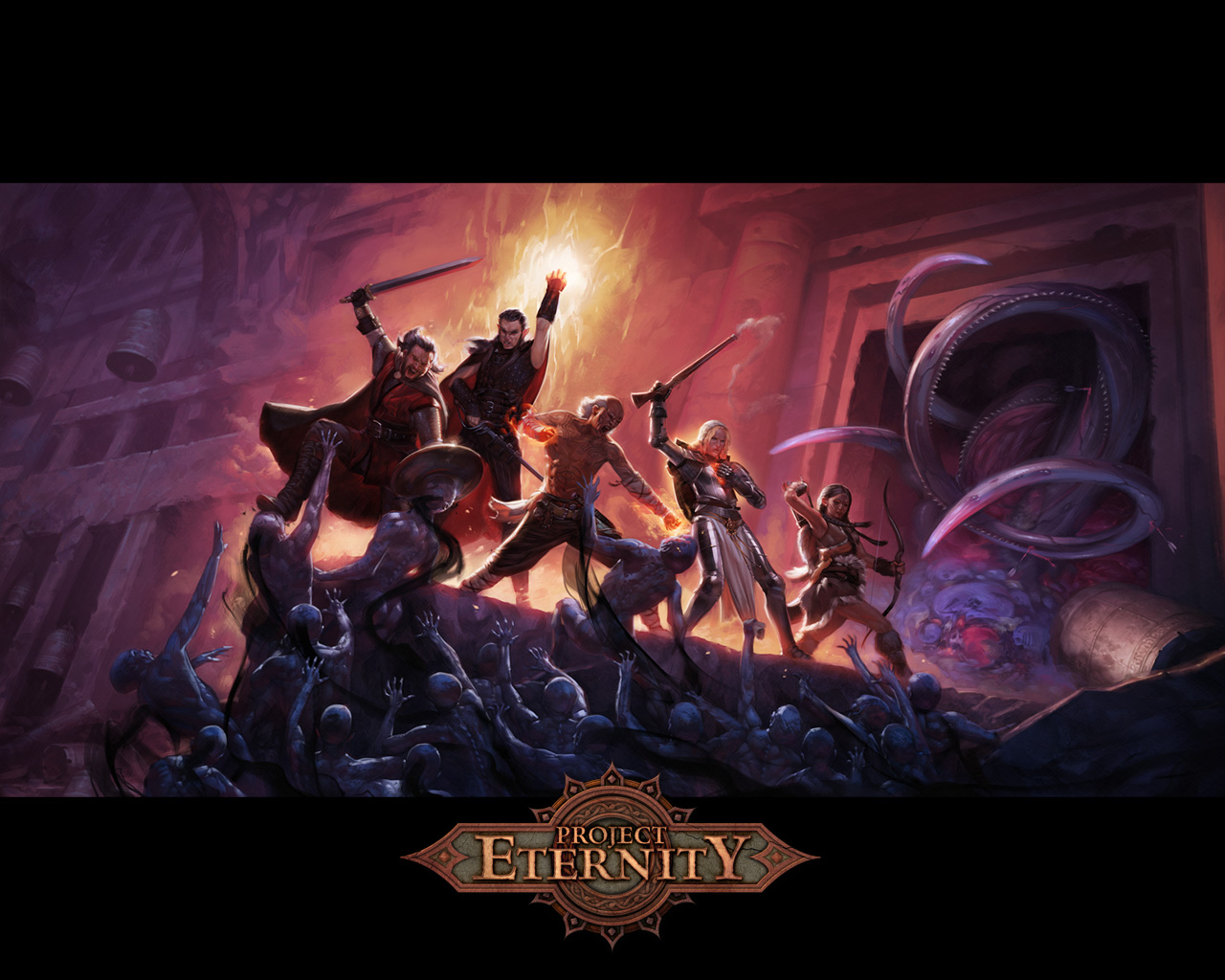 Staff member
#72
Goddamn that's an awesome picture.
Welcome to TFFv3! Here's where we are right now.

#73
Watashiwa said:
Goddamn that's an awesome picture.
Click to expand...
Indeed. I hope that gets good funding, cause it looks so badass.
"The crazy are usually harmless; it's the sane people who cause all the bad shit." - Me

Staff member
#74
All right boys and girls it's time for Watashiwa to pimp that Kickstarter. This week, Project Eternity again. Yes, again, because Project Eternity is going to be that fucking good. They're building a megadungeon based purely on the number of backers and facebook likes they get: for every 10K facebooks and 2.5K backers we get another floor. They're at six now. Remaining stretch goals are a CRK style stronghold at $3M and a second Athkatla or Baldur's Gate style metropolis at $3.5. Seriously guys get out the word, this is going to be awesome.

<a href='http://www.kickstarter.com/projects/lootdrop/an-old-school-rpg-by-brenda-brathwaite-and-tom-hal' target='_blank' rel='nofollow'>And then there's Shaker.</a> Remember the Old School RPG project I mentioned earlier? This is the working title. A few gaming RPG greats from way back when are trying to make another Wizardry/Might and Magic style game. It could be good, but it ought to be great. Here's hoping they meet as many of their stretch goals as possible.
Welcome to TFFv3! Here's where we are right now.

#75
Obsidian has also posted the first Project Eternity screenshot, for those of you who haven't been keeping track. You can find it <a href='http://media.obsidian.net/eternity/media/screenshots/0001/PE-TempleEntrance01-2560x1440.jpg' target='_blank' rel='nofollow'>here</a>, and I must say, it looks pretty awesome.
You must log in or register to reply here.
Share: Facebook Twitter Reddit Pinterest Tumblr WhatsApp Email Link
Top